Doug Hopkins has reviews all over the web at places like www.Yelp.com, www.BBB.org and Google Reviews.  Below are just some of the amazing reviews from the people we have helped along the years.

Just 1 review 5 star rating of  example of people like you we help everyday.

“Just an honest review from an actual Doug Hopkins customer. I called Doug, I imagine like anybody considering calling his team, knowing that on the final line, the sale price for my home would appear lower than a traditional sale would have netted. We all know, though, that there are a bunch of fees and complications with a traditional sale: closing costs, agent fees, inspections, repairs, and worse, for me: the potential for the deal to fall through. I wanted to get out of my house, relatively quickly, and without worry that the deal would fall through. The housing market here in Scottsdale was super hot and I wanted to strike. After some negotiations and very few back and forths (I’m a negotiator at heart) – we agreed on a sale price that was roughly 15% lower than what a traditional sale would have been. That number becomes infinitely more palatable when you consider all the fees mentioned above. The difference is not nearly as much as you think when its all said and done. Heres what I want everybody to know. Doug Hopkins and his team mean what they say. They’re honest. After our contract, I had to ask for a two month escrow because of things going on in my life. During those two months, the Scottsdale real estate market TANKED. I feared, every day, that they would jump out of the contract and just give up their Escrow money. It would have been 10x cheaper for them. The price of my home likely fell by $50,000 in two months. It was absolutely crazy. Doug Hopkins and his team honored our deal. I closed, without issue, and I can’t tell you how relieved I am. Doug and his team likely put an extra $50,000 in my pocket by choosing to honor their word. They could have gotten out of our contract. And they chose not to. They chose to be honorable. And I’m forever thankful. I can only offer you my experience and my word. For me, Doug and his team were an amazing resource at the right time. And I’m truly thankful for their service and their integrity. Best regards, Mike“

Karin R. We needed to move from AZ to WI and considered a traditional sale. Having seen Doug on on Property Wars (A&E) and local advertising we thought this sale method might be an option for us.   Once I provided our home’s basic info via phone Josh called with a sales price range estimate. We agreed and Josh Barton came the next day for first hand look and discussion. He noted our house was very clean but in need of updating. After a tour of the home we had a discussion of home features, up to date maintenance/repairs, and neighborhood market data.  Josh provided an offer  that worked.  It’s remarkably easy to sell to Doug and his team.  Staff is friendly, professional, prompt, honest, forthright, responsive, knowledgeable and accommodating. No fees nor commissions,   Josh worked with us to establish a mutually acceptable closing date. No delay in the sale and funds were transferred to us on the closing date without delay. By far the easiest property sale we’ve ever experienced. I can’t thank them enough for the peace of mind and excellent transaction.  I highly recommend Doug Hopkins and his team!

Doug Hopkins has been helping Arizona homeowners that need to “sell my house fast“, get fast cash offers to buy their homes for years.  Check out amazing Doug Hopkins reviews, and avoid any fake complaints or scams for www.doughopkins.com.  Find out why Doug Hopkins is the best cash home buyer in Phoenix Arizona. 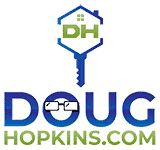